This explains, in a nutshell, what information design is all about and, indeed, helps us to understand the dynamics at work when we share information to others in some way. Whether or not the presentation of that information is produced rightly or wrongly, we are designing informational artifacts. What do we mean by the word “information” and how do we tell if design is used rightly or not? Merriam-Webster defines “information” as “the communication or reception of knowledge or intelligence.”∗ Transmittal of information needs to be based in knowledge, or in other words, something you can know.

As far as determining whether we are designing rightly or wrongly, you have to understand the principles behind making such value judgements. As I stated in the “Why is ID important?” tabbed section of this website, “Practicing good information design principles from the early stages of design through artifact release minimizes or avoids information failures.” In other words, if you make something or write something or design something, then the way you do it needs to be clear, accurate, and meaningful, avoiding information failures, like misinformation, disinformation, and non-information.∗∗  Such failures of informational design are part of what makes up bad design.

This post focuses on the kind of failure known as disinformation, a staple in the pantry of the propagandist. As I defined previously, “Disinformation is when the designer intends to communicate false, inaccurate, or partial information to leave an inaccurate or biased impression or covert lie.” This is a failure to inform, because it is not accurate communication. The person receiving it does not gain knowledge, not real knowledge anyway, as in Merriam-Webster’s “the body of truth, information, and principles acquired by humankind” definition of the word, knowledge. The word truth is the keyword here.

Disinformation has been the tool of every manipulative government system from disinformation campaigns in ancient Rome using poetry and slogans stamped on coins to Josef Stalin’s Soviet Russian use of photoshopping before the software program “Photoshop” had been invented. These examples mirror what is happening today, both in textual content and in images. When content is manipulated intentionally to delude, misinform, or mislead, this is disinformation. The creator of the content or designer of the images wants to communicate false information in order to purposely deceive and skew our understanding of the truth. This is the nature of propaganda and why its creation is different from any other persuasive and rhetorical act. This is why such an artifact must be seen for the disinformation that it is: the intention to deceive has been built-in to the content by its creator.

The phrase, “Fake News” has become meaningless by people slashing about senselessly with it, their weapon to dismiss any pushback against their “side.”  Fake news is a fake cry, unless it includes substantive research to support the disclaimer. What is “fake” about Fake news? Such a determination ends up belonging to whoever is using the phrase.  A much better way to pushback against false content—in other words, disinformation—is to examine the process behind the content creation and the design in order to understand its underpinnings and the values of those creating it.

Ask questions. For example, ask “Who made it?” or “Does the website have an ‘About’ page, sitemap, or specific contact information?” and “Where did the elements of the content come from? Can I find the primary sources for a particular quotation?” or “When was the first appearance of this image online?” Most of the time, it is quite easy to search out the provenance of an image or textual content (i.e.,  blog, quotation, article, etc.); I usually can source something that I have a question about in a minute or less, although of course, sometimes it takes much longer. What if I can’t find the source or provenance of an image in a reasonable amount of time? Do I just use it anyway? No, I do not. One should never just use a questionable image or share an unsupported tidbit, just to make a propagandistic point. This is disinformation and another word for that is “lying.”

Here is a case in point. I use this merely because I saw some people using it which was terribly shocking to me, especially, because I have had a respect for those people and I wish very much that they would realize that to believe it is to believe a lie—and even worse, to distribute such misinformation is to LIE. There is no way around it: if you distribute or share something that is a lie, then you are lying, especially if you have been warned that the content or image is not just misinformation (i.e., an honest mistake) but it is disinformation (i.e., an intentional twisting of truth to purposefully make someone believe that an untrue thing is true). 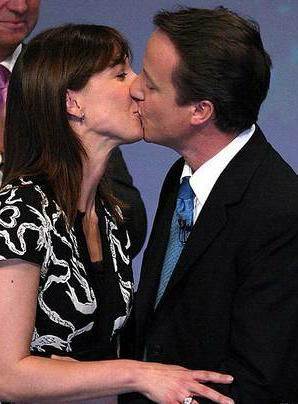 David Cameron, Former Prime Minister of the UK and his wife Samantha (notice how the photo had to be flipped horizontally from the original.) 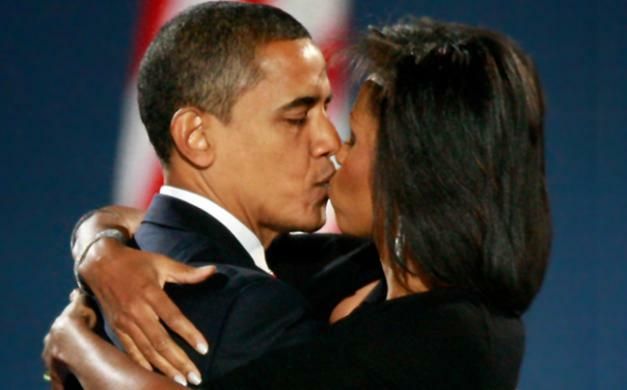 Why would someone who thinks the photoshopped picture (below) shows and advocates morally wrong actions (i.e., men kissing) find it acceptable to create, post, and share the photoshopped image—a creation which steals actual pictures of these men kissing their own wives—in order to use the mashed-up artifact for disseminating misinformation, which is another way of saying that they are lying by sharing this untruth?

The answer is that the creators and disseminators of the photoshopped image are more committed and concerned about the propaganda value of the false image than they are in pursuing and communicating the truth. There is no mistake going on here with this image: the creator of the image purposefully abused truth in order to communicate a falsehood. There is no doubt that this is a kind of propaganda, in which the aim is to further an objective.

As much as I dislike showing this photoshopped picture, hence the reason that I added the warning that the picture has been photoshopped, I have to show it to convey how easily disinformation can be created and disseminated and why it is imperative for people to do at least some research to prove or disprove the content and images, which they believe to be true or that they share with others. When a person shares untruths, they are taking part in the lie and are liars, even if they did not create the design or write the content themselves. One’s reputation for integrity goes on the line when you share, make, or advocate for things that are not true.

As I pointed out above, it took me less than 30 seconds to find the provenance of the original images used in this mash-up through using a Google Image Search and therefore, I was quickly able to debunk the photo on my own, without having to resort to Snopes or any other fact-finding website. I am not able, however, to explain why anyone would wish to use such a devious means to disperse their ideas or what is being advanced here, other than lies.